Camp in the Cloud 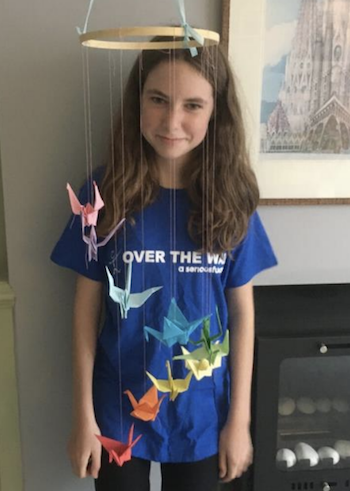 Everyone has been affected by this pandemic, there's no question about that. Though it's often easier to think about what we've lost or missed out on, the most remarkable things to come out of this pandemic is the creative and innovative solutions people have come up with. The need to continue to connect and create together has given rise to some exciting projects. One such project is Camp in the Cloud. Find out how Over The Wall are making sure they continue to support children and young people over the summer. read more

“Camp in the Cloud was brilliant – absolutely brilliant.”

When Ariel was 11 years of age, she was rushed to hospital after experiencing a severe pain that her parents believed was appendicitis. It turned out that Ariel’s pain was not appendicitis, but the tests she had revealed that Ariel’s kidneys were not functioning properly. After several months of tests it became apparent that this was due to a genetic condition that causes chronic kidney disease and that her kidneys would eventually fail.

Now, after more than four years of medication, many hospital appointments, constant monitoring and blood sample investigation, Ariel is aged 15, and at what is known as ‘stage five’ of the disease, meaning she is currently on a kidney donor list and awaiting a transplant.

“Illness is always there, it’s always hanging over her”, explains Ariel’s mum Sarah. “She has always undergone examinations and appointments; she has blood tests every month -which she finds horrible. When she was 11, she asked, ‘Am I going to die?’– and at that point, without knowing the reason her kidneys were failing, the doctors were not able to give her a reassuring ‘no’ as an answer. To be faced with your own mortality at 11 is quite significant and needless to say- it had a huge impact on her.”

Since then, the doctors have gained a stronger understanding of Ariel’s condition, isolating the gene that causes her kidney failure. “Ariel understands that she’ll never be free of medication and operations.” said Sarah, “and a transplant will certainly make her life better, but knowing that for there is no cure has certainly altered her childhood. Most 11-year olds don’t have to think about that.”

The discovery of camp

Ariel first discovered camp when she visited Barretstown, (Over The Wall’s SeriousFun sister camp in Ireland), in 2019. She was later delighted to learn that Over The Wall provided similar camps, closer to her home in Northumberland. Her parents applied and she was offered a place at Over The Wall’s Midlands Health Challenge camp in the summer of 2020.

However, due to the outbreak of Coronavirus, all camps planned for the year were cancelled. “Obviously, Ariel was so disappointed,” said Sarah, “but then we learnt that there was going to be something called Camp in the Cloud – which she was so excited about.”

Camp in the Cloud- A virtual version of camp

In response to the camp closures, OTW created an interactive online platform designed specifically for the children who were scheduled to attend camp in 2020. The aim was to bring, the joy and magic of the physical camps into each families’ home.

“Camp in the Cloud was brilliant – absolutely brilliant.” said Sarah. “It was such a lovely surprise for Ariel. It felt like every effort had been made to make the alternative as exciting as possible. When the box turned up in the post, Ariel was just so excited. It was lovely- her receiving a huge parcel that was just for her, that no-one knew about, or had any idea what was in it. And the build-up of not being allowed to open it took the excitement to another level! It was something incredibly special and really gave her something to look forward to.”

“We had been shielding during lockdown, so for us, things were still very restricted. It was particularly difficult when Ariel heard about friends emerging and coming out of isolation and getting back to some level of normality, as she was still shielding inside. But having a parcel with activities- and not knowing what was going to happen made her so pleased- it really changed things.”

“It was lovely to see such an effort had been made by OTW staff. It felt like they completely understood the disappointment that the kids would have felt and really thought about ways to change that. And it worked.”

“During Camp in the Cloud Ariel was on such a high and was really animated and buzzing all the time. The cabin and team chat with others made a big difference. By day three she had got to know people and was looking forward to chatting – in the evening she was a little sad that the day was over. It went so quickly for her- she wished it could have been longer.”

“She loved the crafts and making the mobile and really enjoyed the ‘escape box’- it was genius putting that in! Over The Wall really did amazingly- the activities were inspired, and so engaging. It just felt like an immense amount of thought was put into it and consideration of the kids was right at the forefront. I was so impressed. There was such variety and interest that was channelled with limited resources -and potentially limited space- yet it completely worked. They couldn’t have provided a better alternative.”

We are asking for referrals, from either health care professionals or direct from the families, so we can give children with a health challenge something to look forward to with Camp in the Cloud. You can refer through our website and it only takes 2 minutes:
Over The Wall - Children's Charity www.otw.org.uk

Who we are, our aims and vision