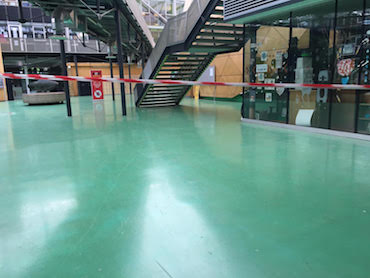 Read an account from a  year 10 student on their experience of returning to school for their one allotted week in the summer term.

Before I went back, I thought school would be the same as it was before Covid except that we would have to keep social distance. Also I thought more of my friends would be there.

THE FIRST DAY
I wasn't worried but I overestimated how long it would take me to wake up. I wanted to be on time, at least for the first day. The public transport was good, the police were there telling you to put your masks on and pretty much everyone was. I met up with a friend, and out on the astroturf there was a different line for each class and the teachers were shouting the class names and so we got in the line, there was about 10 to 15 in each line. Then we had to sign ourselves in and they had a foam sanitiser you pressed with your foot.

There was only 15 or so in the class which was calmer because we weren't sitting next to each other, which makes people more rowdy. It made it much more quiet and civilised. In the break we just sat in the same class we had for the whole morning and just talked to each other and the teacher for a bit. For lunch we literally just had to keep to the same seats and someone came round with loads of different bags of food. We didn't get to go outside at break at all. It wasn't very interesting, they could have made it better by having a place where we could go to eat and meet our friends. Rather than staying in the same class for lunch, it would be better if we had a socially distanced lunch hall where you could sit wherever you wanted.

THE WEEK
Today was the same as yesterday and the day before - it was boring, nothing happened. We only have two different subjects each day so by the end of the week we cover all the subjects, but it would be better if we had different classes more often. For the days that we don't have any extras, like music or photography, we just sit in the same seat all day. I did go to the music block for music but that will only ever happen again on Friday for photography.

I've not met a single teacher that I usually know. Today my friend didn't come in so I travelled on my own on the train, I saw my tutor on the train but not in school. I said hello. We still have to wear school uniform. I don't think many people were with their friends, we were all split up. I think its a good idea we came back but it could be executed much better - it's boring because my friends aren't there.

I saw a funny bug on the timetable for the trains - it was pink and yellow and green!

TEACHERS
I never saw my usual teachers, just different teachers who were already in the school. They should have brought us back in class groups. I didn't see my class tutor either, I don't think I will see her - they didn't say why.

EXAMS
The teachers said they might cancel our GCSEs because we missed four months and we will never catch up - they might just do what they did for the year 11s, but they can't confirm it. I don't really know what my target grades are but I'm sure they're decent. For some subject they might just give us predicted grades which I think is OK. Maybe they will delay the exams till later on, or cancel some or give us predicted grades, which is what I want to happen. I want to learn the same things without the stress and pressure of the exams as well.

It's the last few days of year 10 and it was fun to say goodbye to the school for another long time. They are probably still finding out about September, but the teachers don't really know anything, I don't know anything, and the government doesn't know anything.

If you have any questions or if you would like us to come and present at your school/organisation please get in touch.

Sign up for our NEWSLETTER and we will keep you up to date with news and information twice a term.

Join the conversation on our social channels.

Here you'll find our policies and guidelines on using and interacting with Well at School.